Six friends braved the cold start and were: Richard, Paul, Dave H, Bob, Alan S and Tim with Richard and Paul leaving early leaving a grand total of four. Apologies of absence received from Robin - who's foot has had an argument with a car and the car won, Mick - nasty cold - keep it to yourself, Peter - aching bones, other nominees are: David G - found a country with a warmer climate, Dave MB - bigger toys to play on, Jamie - nail in car tyre only six months old - not sure if the nail or the tyre is six months old and Cliff - well just double booked and can't be in two places at the same time, so as a result a slow news day. On a serious note, we wish those that are injured and ill a speedy recovery, it's not nice having to watch daytime TV. Thanks to June for the tea's and cakes. 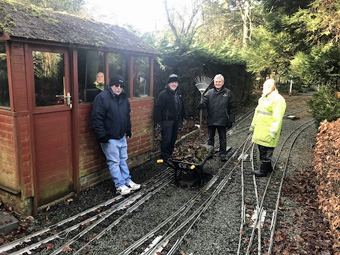 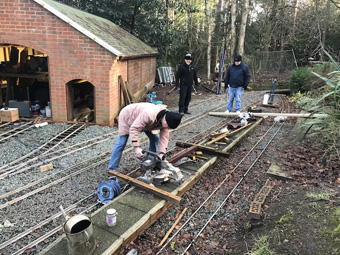 We spent the morning just chatting about anything and everything whilst Alan A went out to get some drainage fittings, plus some moss clearing from the roof of Dingly signal box. It was so thick that it would have needed mowing if left and it had started to fall onto the track. The lefthand picture shows the effort made and filled the wheelbarrow. The remaining moss will have to be treated later in the year. After lunch (not sure what time we had it as Cliff was not available) work started on the carriage shed drainage, which involved replacing a broken bracket, sliding the guttering along and fixing the down pipe. This was then connected to a pipe leading to the rear of the building and will be connected to a sump next time. The fall of the pipe was tested with a bucket of water and proved successful. Righthand picture shows Alan cutting the down pipe with the necessary safety watchers. Bob worked in Dingly and Old Oak signal boxes. Many years ago an electrical cable was run from the engine shed to Old Oak signal box with too many wires (over engineered at the time), however this is proving to be advantageous as Bob needs more wires to Dingly as was able to make electrical connections within Old Oak box which in turn will give enough wiring to run extra signals when exiting the loco shed. Alan A continued with the roof eves cutting complicated angles and overall a steady slow progress was made.

Another picture from the archives 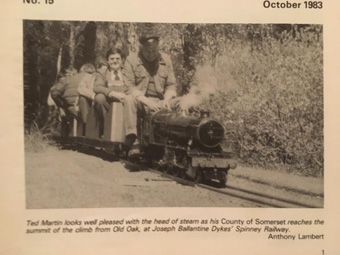 After our last visit to Ted Martins woodland garden railway, Robin sent in the picture above showing Ted Martin driving County of Somerset locomotive at Spinney in October 1983 and just reaching the top of the branch from Old Oak.

We appear in the Seven and a Quarter News

With the first meeting in 2020 cancelled, DG occupied his time by gathering the three recent e mail exchanges about our history into new pages within the website section
'The Past', under a sub heading 'Odds and Ends'
The link below goes to the story in the 7¼ News that was here in our 'News'.

Link to Spinney Website, 'The Past', 'Odds and Ends'" 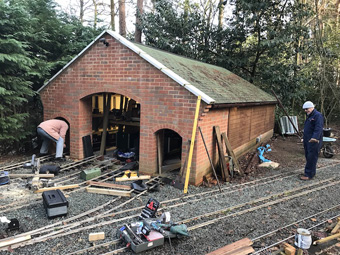 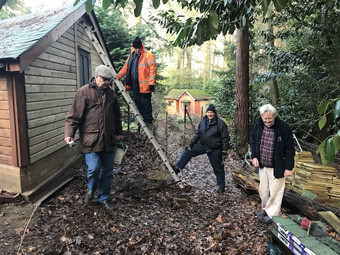 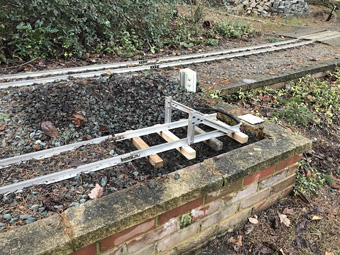 Nine friends:- Alan A, June, plus Tim, Robin, Richard, Mick, Alan S, David G, Cliff, Paul and Dave H. Messages from Bob, David D, Dave MB, Peter and Jamie to say they could not attend. I was last to arrive, yes Cliff beat me, and lunch was immediately called. The main work focussed on the carriage shed project and on going work included, painting the wood work, fitting the guttering and cutting and fixing the wood to make the carriage shed door frames. Robin has made a buffer stop which is ready to be fitted at Old Oak and just needs the wooden buffer beam which Peter will make after Christmas. The short siding outside Spinney signal box has also been lifted as this will also need a new buffer stop and the gradient fell the wrong way. So when it is replaced, anything left in the siding should tend to roll towards the buffer stops and not the running line. Work finished early approximately 15.30. Happy Christmas. 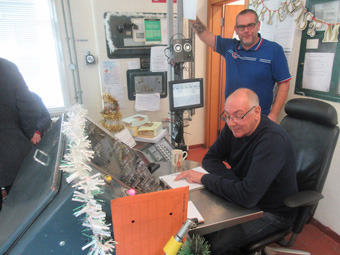 We entertained some London Underground signallers and a trainer during the year and as a return gesture Sean and Jason invited Mick and David G to view three signal boxes which will soon disappear as technology takes over and transforms everything to computerisation. The picture shows Mick at the Upminster panel.

As the Herts and Essex car arrived at the railway the thermometer read 0.5 degrees; this after Bob suggested the forecast was good - but then he was tucked up safe in Wales. (Get well soon Bob.) 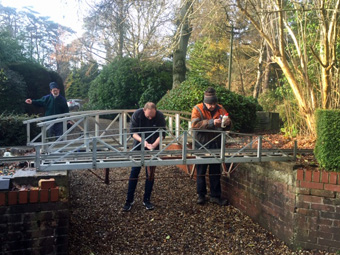 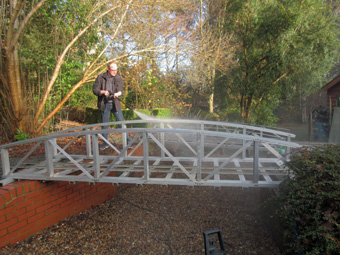 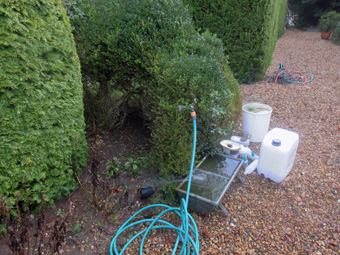 It didn't begin well! DG turned on the tap and it wouldn't shut. Unkind people said he had broken it but perhaps the failed tap washer had something to do with the overnight frost.
Anyway, Alan A, broke off from his carpentry (see later) and, commendably and without complaint, found the stopcock, went out and bought washers and made a repair.
The tap photo also shows one of the many leaks in the garden hose we used to connect to the pressure washer.
The other photos show Rob and DG at work, (others also assisted) and we left the bridge without the leaves that had been there and the metal a bit cleaner. A second attempt is proposed before we start running in the spring. 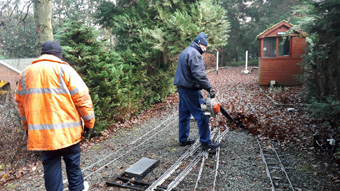 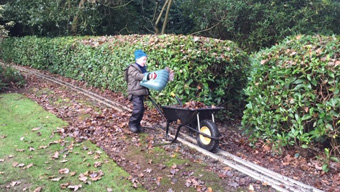 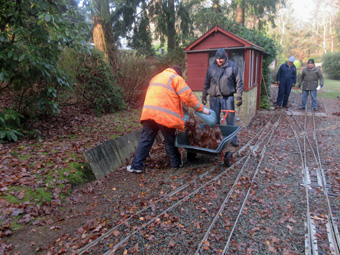 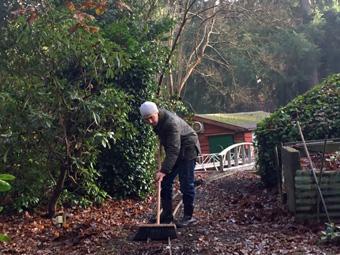 Nothing really to say, but we spent most of our time at it. The frost would have brought lots down overnight so maybe we can hope the worst is over but.....

To my shame no pictures; but Alan A spent most of his day alone in the workshop preparing these doors. Nothing to see on site but hopefully there will be progress to photograph next time (14th December) when we may indulge in some Christmas Cheer. 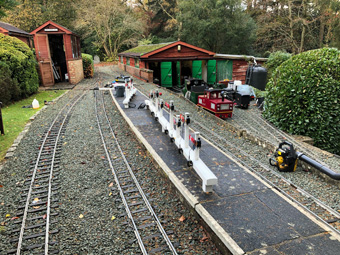 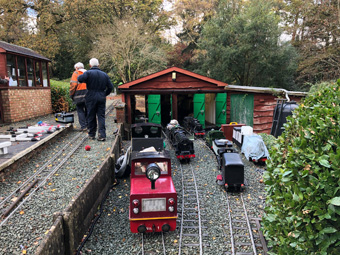 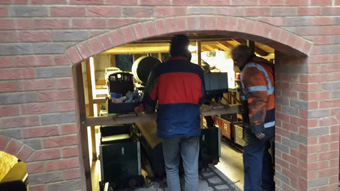 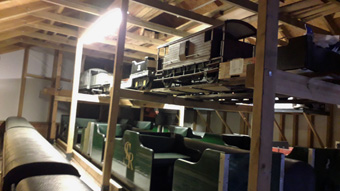 A pretty full turnout on a pretty dismal and overcast day. Notable absentees were our President (somewhere in Europe) and our usual News compiler, hence this effort from DG who awaits, in fear, the censure of the Grammar and Truth Police (David D)

The top pictures tell the basic story of signals washed down and collected whilst any locomotives with water in their boilers were drained down. Pictures from Alan S.

The bottom two pictures, (thank you Peter) show the now crowded carriage shed - full because only two vehicles now remain in the tunnel. Once we get the doors on and some painting done it's just possible that, at last, we can give a cheer and say

The Carriage Shed is Finished !

A delightful picture of Karen, ready for winter hibernation, completes this DG News. 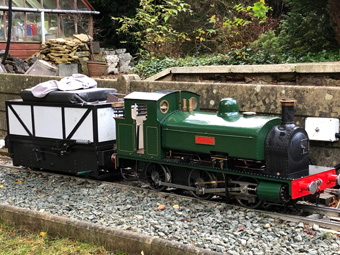 To see earlier raw News use the 'Archive News link at the top of this page.

More usefully, use the link to 'The Past' on the front page for summaries.